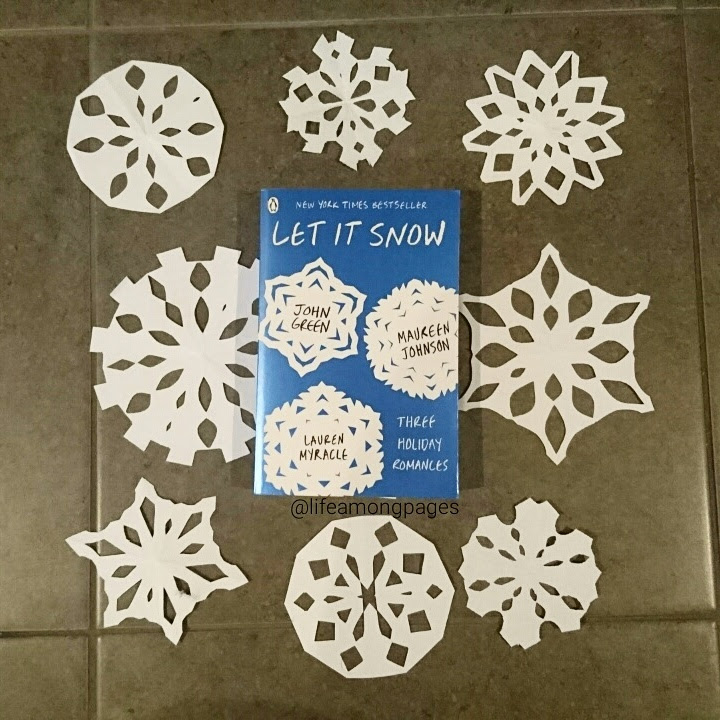 Let It Snow reminds me of Love Actually, where it tells a few stories about incredibly different characters, but in the end, you realise that they are all connected in some way. It’s a trend Hollywood loves these days. That was this book, though I hope that isn’t a deterrent, because it’s an enjoyable light hearted read.

Let it Snow is split into three short stories, each written by a different author: ‘The Jubilee Express’ by Maureen Johnson, ‘A Cheertastic Christmas Miracle’ by John Green, and ‘The Patron Saint of Pigs’ by Lauren Myracle.

“One person’s crazy is another person’s sane, I guess.”― Maureen Johnson

The first story, ‘The Jubilee Express’ by Maureen Johnson, was my favourite out of the three. It was sweet, incredibly funny and the protagonist Jubilee was easily relatable. It also starts the ball rolling for the other stories. It story centers on Jubilee whose Christmas plans are obliterated when her parents are locked up after a shop riot, and she has to take a midnight train to her grandparents. However, the train hits a snow bank and is unable to go any further than a small town. She gets off in search of food, and some peace away from fourteen over pepped cheerleaders, and finds a lot more than she expected. I adore the way her and Stuart’s friendship blossomed over their albeit short timeframe of knowing each other. It didn’t feel too unbelievable considering what they had previously been put through. Definitely my favourite story and has me wondering why I haven’t read more of Maureen Johnson’s work.

“Something about me has always liked the drama and inconvenience of bad weather. The worse the better, really.”― John Green

‘A Cheertastic Christmas Miracle’ by John Green was rather conflicting for me. I’m not entirely sure where I stand with it. Overall, I enjoy the lightheartedness between the trio of friends we follow on their adventure to play Twister with the aforementioned cheerleaders, and hopefully “get laid”, however, the focus on how hot the cheerleaders are, and how much they want to get with them. Repeated over and over felt a little too much, yes I understand this is told from the perspective of a teenage boy and he would logistically be thinking that consistently. The story didn’t need it being repeated like an incessant drum. I adored the Duke; I loved her spunk and really felt for her being stuck in the friend zone, until that was changed in the final pages of the story. So overall was quite sweet, and funny. Just parts that really weren’t my cup of tea.

The final story, ‘The Patron Saint of Pigs’ by Lauren Myracle, was my least favourite out of the three. The main character, Addie, was just incredibly unlikeable and just bored me, she was whining about how much her life sucked because she cheated on her boyfriend and he stopped talking to her. She had me rolling my eyes at her the entire time. That being said the ending was quite sweet with all the characters from the previous stories all coming together in the one place, which was nice and had me smiling, but yeah she was just incredibly taxing to read about.

Overall, Let It Snow is quite an enjoyable read. Good for reading with a cup of tea during winter, it’s also good for getting you into the Christmas spirit. Some stories are better than others, which is to be expected, but I still enjoyed it.

Let me know your thoughts below.