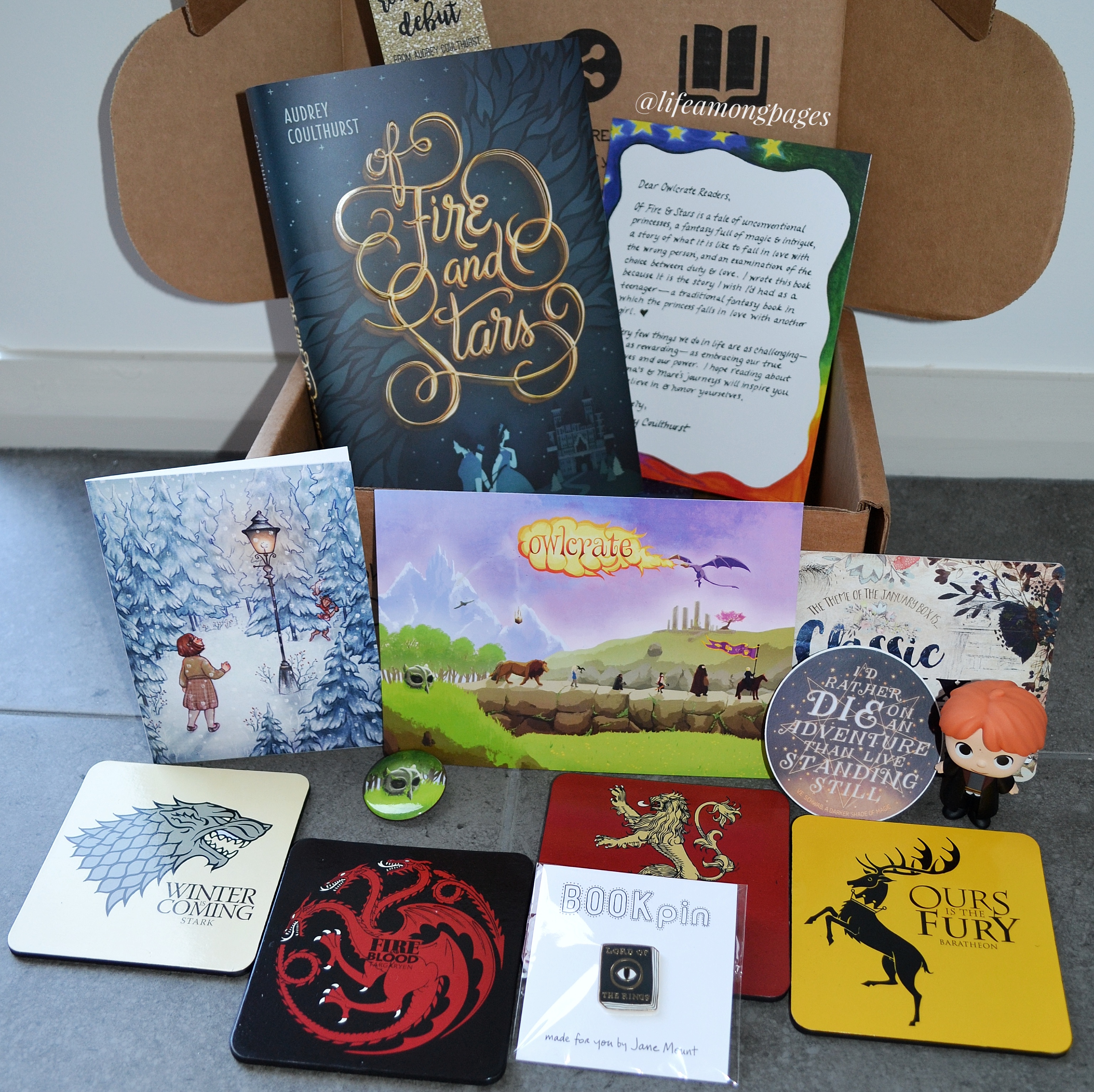 This month’s unboxing is from one of the most popular book subscription boxes ever, they are practically infamous among the online book community. This month I’ll be posting a review on Owlcrate’s December Epic box, which I know is late since it’s already January, however, I didn’t receive my box until the new year.

Owlcrate is an American based subscription box company. They are a monthly subscription service that delivers newly released Young Adult novels and a variety of bookish treats.

Of Fire and Stars by Audrey Coulthurst 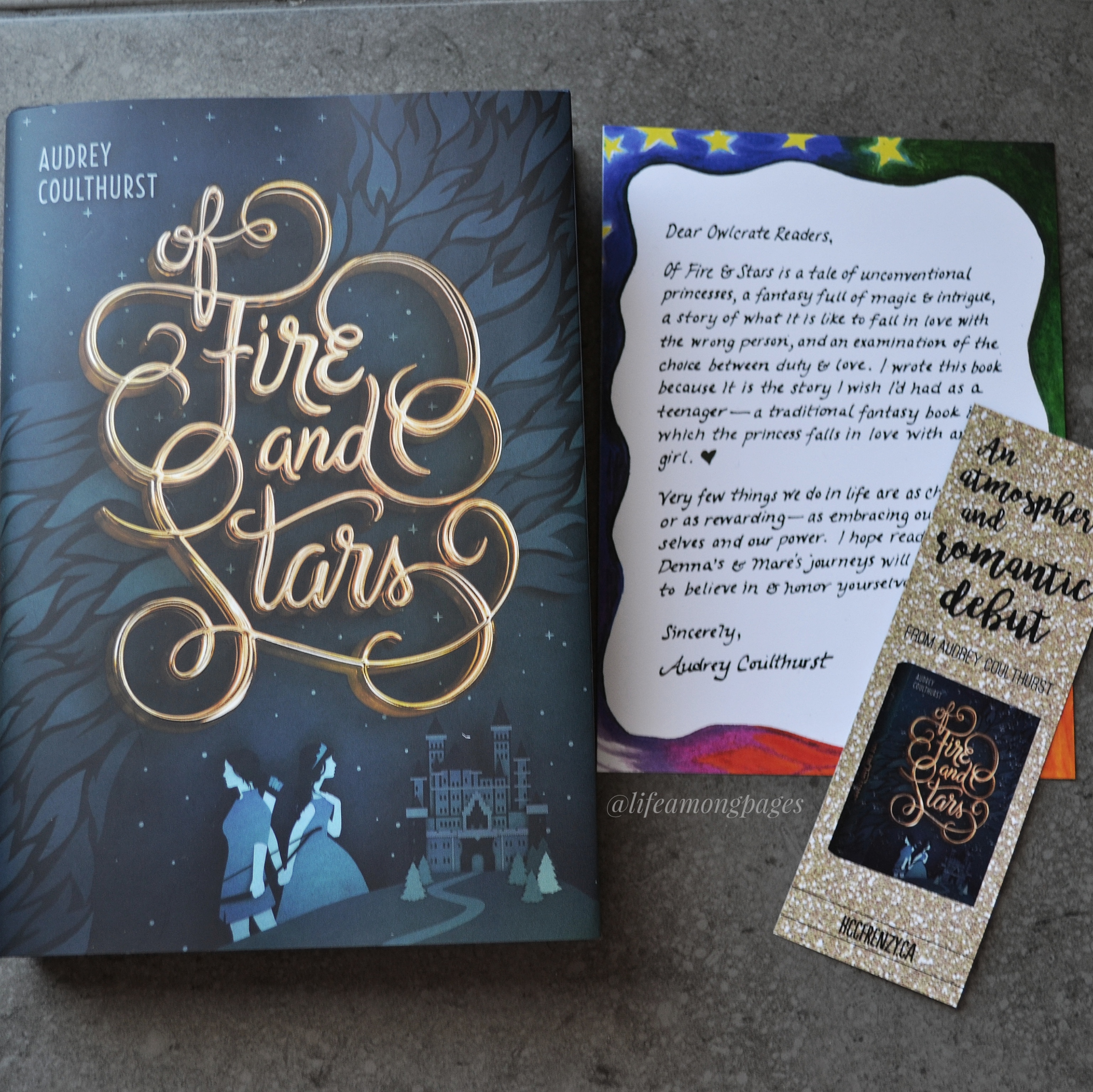 “Betrothed since childhood to the prince of Mynaria, Princess Dennaleia has always known what her future holds. Her marriage will seal the alliance between Mynaria and her homeland, protecting her people from other hostile lands. But Denna has a secret. She possesses an Affinity for fire—a dangerous gift for the future queen of a kingdom where magic is forbidden.

Now, Denna must learn the ways of her new home while trying to hide her growing magic. When a shocking assassination leaves the kingdom reeling, Mare and Denna reluctantly join forces to search for the culprit. As the two become closer, Mare is surprised by Denna’s intelligence and bravery, while Denna is drawn to Mare’s independent streak. And soon their friendship is threatening to blossom into something more.

But with dangerous conflict brewing that makes the alliance more important than ever, acting on their feelings could be deadly. Forced to choose between their duty and their hearts, Mare and Denna must find a way to save their kingdoms—and each other.” – Summary from Goodreads

I am completely looking forward to reading this book, I’ve been in dire need of reading more diverse books. I absolutely adore the premise of this book, and cannot wait to read it and find out how the story unfolds. We also received a really nice letter from the author, though I was surprised that there wasn’t a signed book plate that is something I have almost come to expect from Owlcrate. 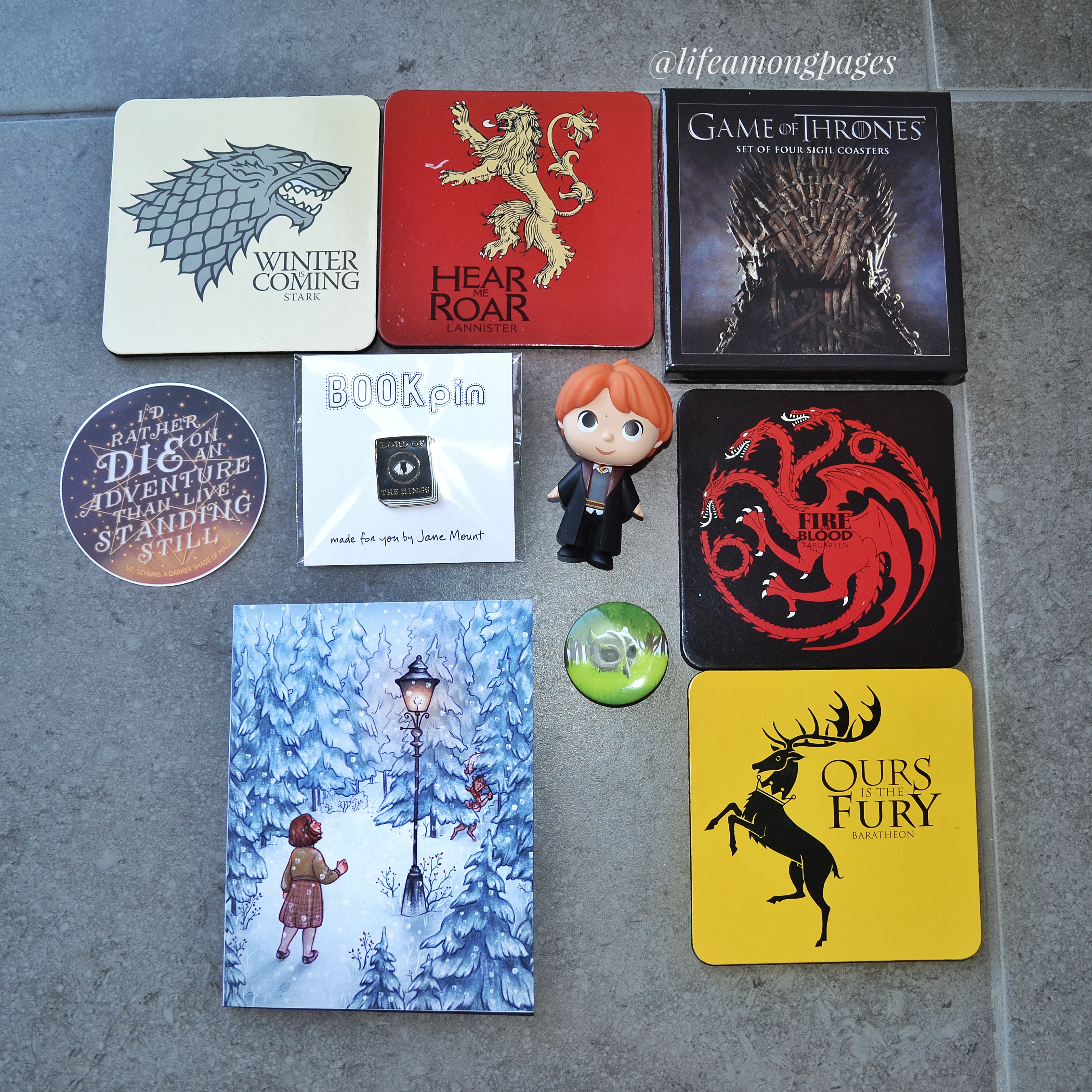 I absolutely love these coasters from Dark Horse Comics; Games of Thrones is truly an epic series. After having recently moved out of home, I love collecting fandom items to be displayed and used around the apartment. These coasters will go down a treat, and they are made very sturdy so they will last a very long time.

Also included in the box was a mystery figurine from Funko. This was a really fun and exciting item, because there was the suspense and anticipation of opening the box and seeing who I got. As you can see I got Ron Weasley, but he looks completely adorable, and now I’m worried that I’m going to become addicted to trying to get a full set of these.

Lord of the Rings pin

Susanne Draws has done an incredible job with this Chronicles of Narnia greeting card. It’s so sweet, and it depicts one of my favourite moments from The Lion, the Witch, and the Wardrobe when Lucy first stumbles into Narnia and meets Mr Tumnus. I’m not sure what to do with the card though, I feel like its too good to write in, I sort of wish it was just given as a print that way the image would have been larger and I could have framed it alongside my other posters I’ve received.

A Darker Shade of Magic sticker

The final item is a beautiful sticker depicting a quote from the very popular book, A Darker Shade of Magic by V.E. Schwab. I have yet to read this book, although I have it sitting in my bookcase waiting to be read. I actually plan on reading it this year. This sticker was designed by Miss Phi specifically for this Owlcrate box, which is amazing.

Overall I was very happy with this box. All the items were from a variety of fandoms that I am a part of, plus the book sounds phenomenal.