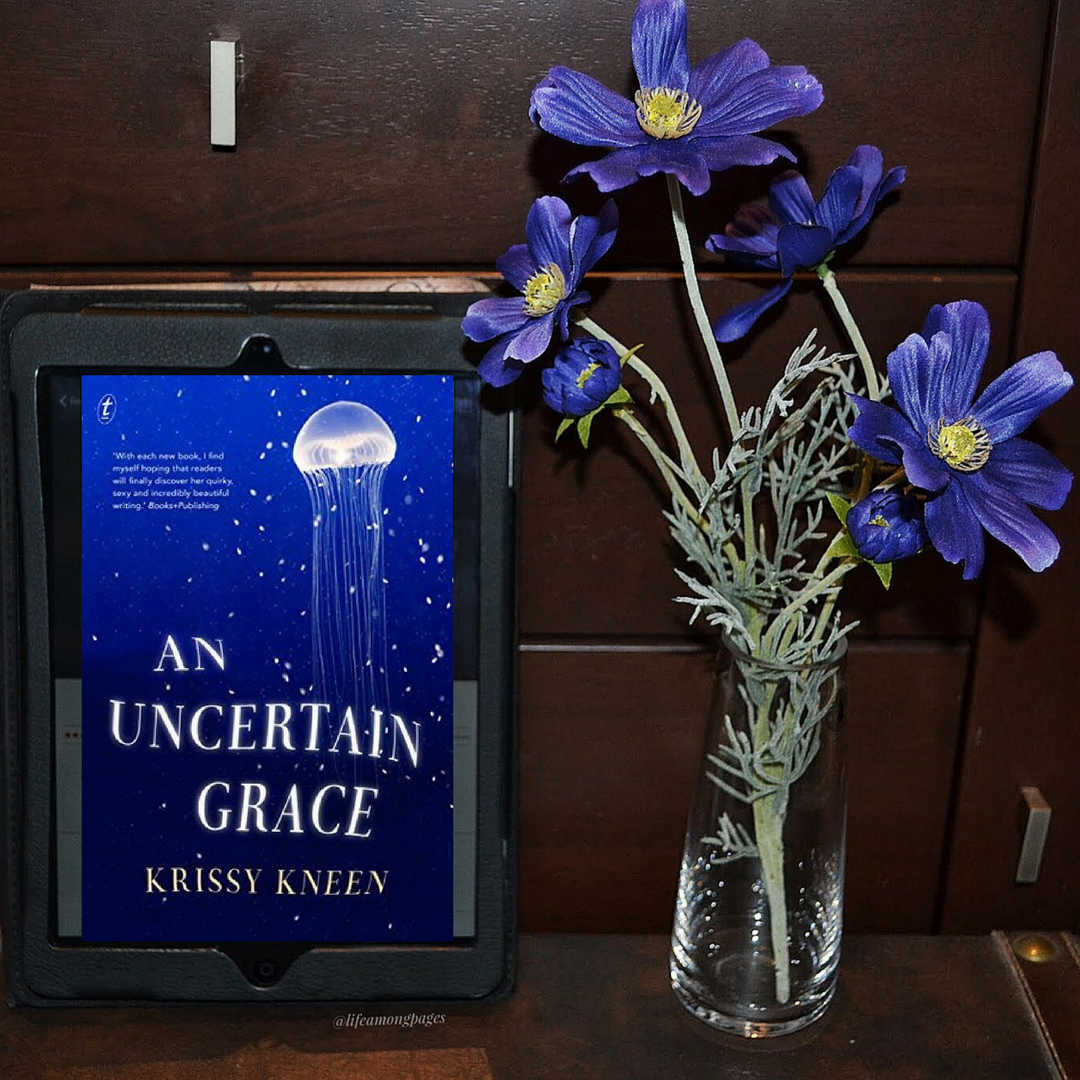 “You know, what makes you human is individual variations moving away from the median data. If you were neutral, if you were just in the middle of all the graphs and charts, then you would be no one. You would be a zero. You would be a computer.”

An Uncertain Grace is unlike any I have read before, mostly because it isn’t in my usual genres. That being said whilst I did find it highly unusual, I quite enjoyed it. The novel isn’t broken into chapters; instead, it was broken into five parts, each about a completely different character (Casper, Ronnie, Cameron, M, Liv).

Later…
A convicted paedophile recruited to Liv’s experiment in collective consciousness discovers a way to escape from his own desolation.
A synthetic boy, designed by Liv’s team to ‘love’ men who desire adolescents, begins to question the terms of his existence.
L, in transition to a state beyond gender, befriends Liv, in transition to a state beyond age.
Liv herself has finally transcended the corporeal – but there is still the problem of love.” – Summary from Goodreads

“It felt real. I felt what Liv might have felt. Or was it some trick? Surely, what I have just experienced was like falling into someone’s unreliable memoir. A lie. A very cleverly drawn one, but a lie nonetheless.”

This is Liv’s story, even though it’s only told from her perspective in the final part. This book highlights Liv’s various achievements and career highpoints, from the beginning where she experiments with the creation of virtual narrative, to the creation of collective consciousness, creating AI’s to assist with rehabilitating sexual predators, gender transitions to neutral before finally transcending and becoming a part of the system herself.

The novel starts with her ending her old university professor and lover, Casper, how she experienced their relationship, making him come to terms with the fact his version wasn’t the only version. I did like how his arc and how experiencing Liv’s memories made him rethink doing it again with a new student. Also opening with this story lets you know that this is going to be an interesting book.

Ronnie’s chapter was probably the strangest, a convicted pedophile is chosen to be a part of an experiment where his mind is joined with a jellyfish to see if it will change the way he feels about children. I just don’t understand the theory behind this or how it would work. Also, the ending was extremely odd.

This was a conflicting chapter to read because of how upfront the sexual aspects were. Cameron is a synthetic boy created for hebephiles, so it made me somewhat uncomfortable reading about how much Cam expressed that he enjoyed his sessions, as it was his purpose. The ending was super ambiguous which I didn’t like too much because it left way too many questions.

The chapter about M felt a bit flat, I didn’t think it had much point except for showing the major jump and how old Liv had become. I did think the gender-neutral thing was very interesting and wondered if one day that would become a reality and the description of what it did to the genitals was intriguing But I just didn’t feel super connected or affected by the story. It felt quite filler.

It was interesting being told Liv’s story through the perspectives of those she interacted with, it was a unique way to go about it. In the final section we get Liv’s point of view told, this is after her body has passed away but her mind now lives on. How and where are never fully explained nor is what Liv’s job actually is. I just assume she is some kind of story collector, where she logs the stories and sensations of herself and others to create things like what she gave Casper. Her mind being uploaded was interesting, but the fact her mind still craved desires and sexual encounters was odd, especially because she was earning an income … as a mind. Her relationships that happen in this chapter were quite odd, and I’m not sure how I felt about it. I became curious wondering if this will become a part of humanity in the (probably distant) future.

Overall An Uncertain Grace was quite an interesting albeit very odd book, that dealt with the future of narrative, artificial intelligence and the role technology and science will play in the future in behavioural analysis.

“I AM BEAUTIFUL. I have never before been beautiful and this first glimpse of this body in the mirror startles me.”