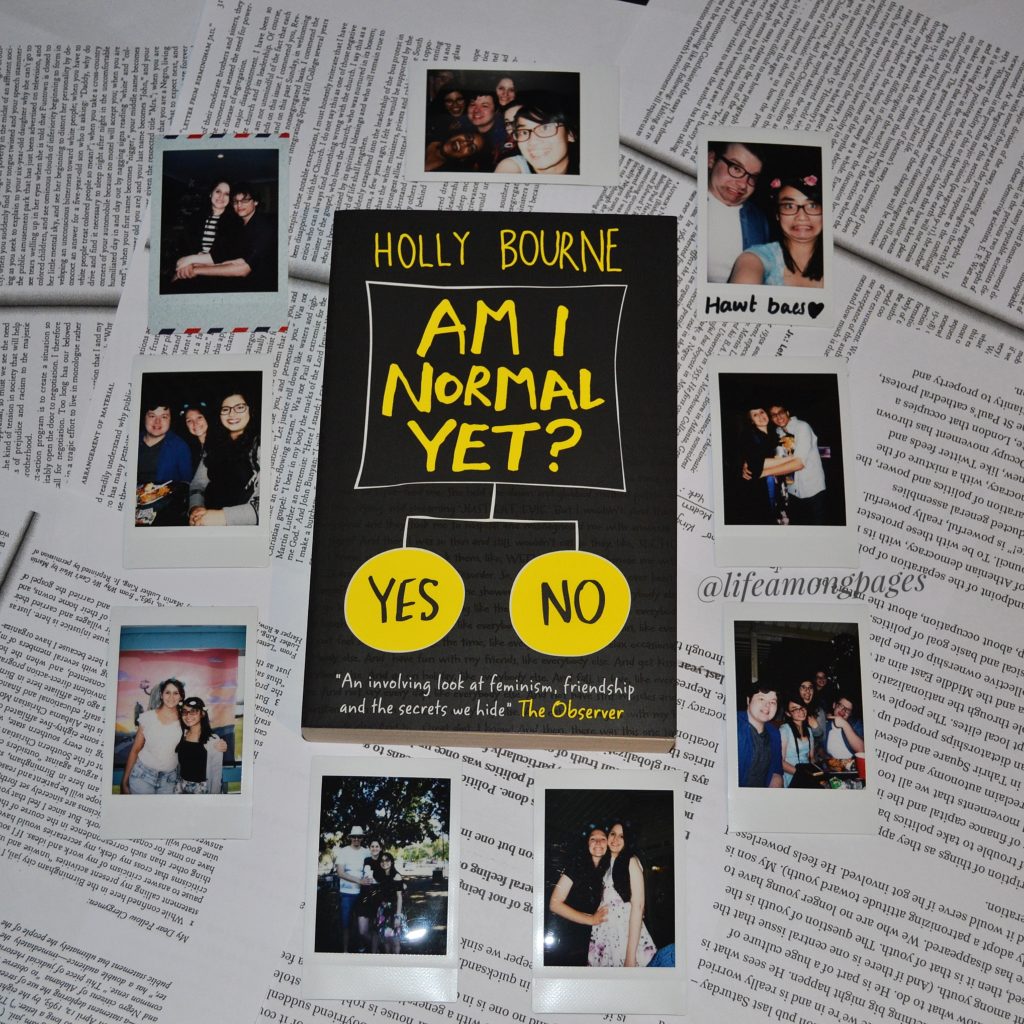 I absolutely loved Am I Normal Yet? I thought it was just incredibly well written and was honest about mental health. Which we need more of in today’s world. I am so happy with the surge of YA books featuring various forms of mental health hitting the shelves recently. Showing teens that its okay to feel this way and will hopefully gets them to seek help.

‘All Evie wants is to be normal. She’s almost off her meds and at a new college where no one knows her as the girl-who-went-crazy. She’s even going to parties and making friends. There’s only one thing left to tick off her list…

But relationships are messy – especially relationships with teenage guys. They can make any girl feel like they’re going mad. And if Evie can’t even tell her new friends Amber and Lottie the truth about herself, how will she cope when she falls in love?’ – Summary from Goodreads

“It was like I’d climbed Everest, had the summit in my sight, the flag in my hand, all ready to pierce it into the top of the mountain and say, “Whoopdedoo, I made it,” and then an avalanche from out of nowhere swept me right back to the bottom of the mountain again.”

This is one of those books I needed to read. I’m currently struggling with my own mental health issues, and when I read this I was in a really low point and reading this helped me. Being able to read about a character that was also struggling was something I found helpful. Also, because Evie’s mental illness of intense OCD is so debilitating is made my own anxiety feel like nothing in comparison, which helped put things into perspective.

However, Evie frustrated me to no end. For starters when she first thinks she could be relapsing she doesn’t tell anyone, because she doesn’t want them to put her back on her medication, which I get, but she knows how bad things can get and obviously the medication helped her. But I absolutely wanted to throttle her when she was on her date with Oli who was brave enough to share his story, and she stayed quiet because “she liked being the normal one.” This made me shake my head so hard that my boyfriend became concerned. I was really annoyed.

The Spinster Club was a really cool idea, and I love how because of this book series they have become a real thing among the fans. I also think it is a great term to take back. No longer should it mean old women who never married. That just conjures up such a sad image; instead remaking it into something teens and young adults can get behind breathes new life into it.

I also like that we didn’t find out what happened “when she went mad” right away, we had to earn it, find out pieces at a time, like a puzzle falling into place. It wasn’t until the fifth chapter were we given specifics about what went down. And even then, I’m still not sure we have the whole story. But that’s what anxiety does, it’s not simple it’s complicated. Anything can trigger it, and sometimes you can be triggered without realising what exactly set you off in the first place. I know that’s what happened with me. My brain just stops sometimes and I’m filled with this intense dejectedness and sadness without knowing why.

This is a really honest portrayal, and the author must know what she talking about because there are actual therapy practices utilised in Am I Normal Yet? The author has an insight of CBT (cognitive behavioural therapy), as that’s part of Evie’s coping mechanisms. This is something I’m currently trying to learn and put into practice. Stopping the bad thoughts in their tracks before they can take over and leave me filled with anxiety.

Bless this book for its honesty, and incredibly raw view on mental illness, you experience the whirl of emotions she goes through every time a bad thought encroaches her mind. The turmoil she feels when she sees how her illness is affecting her family. It’s so realistic that my heart was aching for her at the end.

Overall, I think this book is amazing, and I will be picking up the other books in the series, which follow Evie’s friends: Lottie and Amber in the years following Am I Normal Yet? I will be recommending this book to so many people because it’s important.