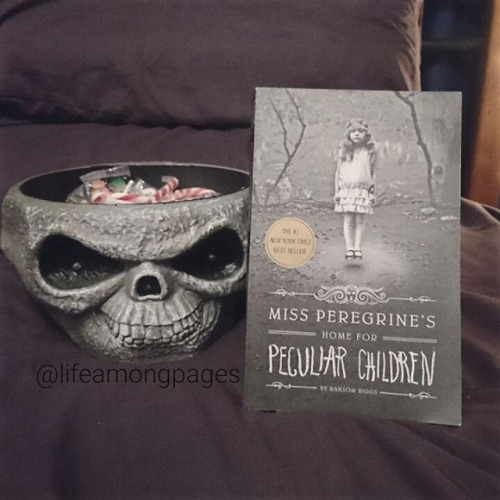 “I had always known the sky was full of mysteries—but not until now had I realized how full of them the earth was.”

Miss Peregrine’s Home for Peculiar Children tells the story of Jacob Portman, and the stories his grandfather told him, the ones he daren’t believe were true.

“A horrific family tragedy sets sixteen-year-old Jacob journeying to a remote island off the coast of Wales, where he discovers the crumbling ruins of Miss Peregrine’s Home for Peculiar Children. As Jacob explores its abandoned bedrooms and hallways, it becomes clear that the children were more than just peculiar. They may have been dangerous. They may have been quarantined on a deserted island for good reason. And somehow—impossible though it seems—they may still be alive.” [summary from Goodreads]

I’d heard about this book for a while, but since the movie has been announced, I decided that I needed to read the book before I saw the adaptation. I borrowed a copy from my friend and was surprised by how quickly I read it.

Looking at reviews online for this book, they are quite divided, with some loving it, and others disliking it immensely. I think the biggest problem that people have is that it isn’t as creepy or scary as the cover portrays. Looking at the cover and blurb, you would think this is borderline horror or at least it would give you goosebumps whilst reading it, and I would tend to agree with them this wasn’t scary.

Sure there were a few eerie moments, but they weren’t nearly as powerful as I was expecting. In that regard, I felt a little disappointed, I wanted the chills, I wanted the hairs on my arms to stand up, but it just never lived up to it.

The photos were amazing; I loved the way they added to the story. Also, the backstory behind the photos themselves, and where they came from, which is told in an interview with Ransom Riggs at the back of the copy I was reading is quite fascinating. However, sometimes they do feel overused, you’re in the middle of a chapter where a lot is happening but then the story detours for a few pages to show the photos. Sometimes it worked well, and sometimes it felt like they were just there because the author thought they looked good, but they were actually unnecessary.

“I used to dream about escaping my ordinary life, but my life was never ordinary. I had simply failed to notice how extraordinary it was.”

Overall, I quite enjoyed the book, even though it didn’t quite live up to my expectations, but it did have the backstory to build and characters to introduce. It ended with the peculiar children heading off into the unknown to help return Miss Peregrine back to her usual self. So, I am definitely intrigued on where Ransom takes the story, and I shall be reading the rest of the series.

I have mentioned it, but Miss Peregrine’s Home for Peculiar Children will soon have its own film adaptation, so I will probably write a review/comparison article about it after I’ve seen it. The trailer already has me slightly agitated; they swapped the names of two characters, which just seems quite pointless, among other things. I guess I’ll just have to wait and see how it all goes.