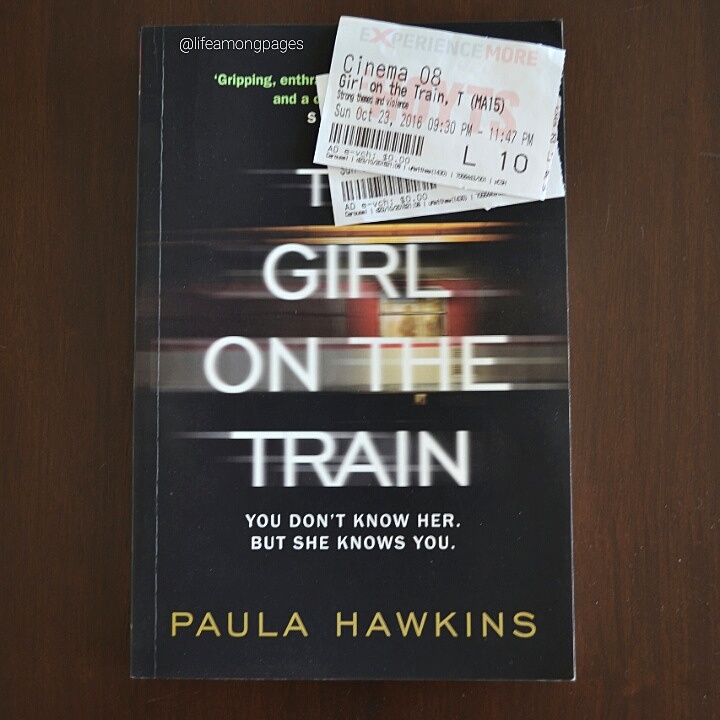 Welcome to the first of hopefully a few ‘film reviews’ where I talk about recent book to movie adaptations I have watched and my thoughts about them.

Synopsis: The Girl on the Train is the story of Rachel Watson’s life post-divorce. Every day, she takes the train in to work in New York, and every day the train passes by her old house. The house she lived in with her husband, who still lives there, with his new wife and child. As she attempts to not focus on her pain, she starts watching a couple who live a few houses down – Megan and Scott Hipwell. She creates a wonderful dream life for them in her head, about how they are a perfect happy family. And then one day, as the train passes, she sees something shocking, filling her with rage. The next day, she wakes up with a horrible hangover, various wounds and bruises, and no memory of the night before. She has only a feeling: something bad happened. Then come the TV reports: Megan Hipwell is missing. Rachel becomes invested in the case and trying to find out what happened to Megan, where she is, and what exactly she herself was up to that same night Megan went missing. (Source IMDB.com)

The film is based on the book, The Girl on the Train, by Paula Hawkins. I read the book last year, and I thoroughly enjoyed it; it was dark and filled me with the desire to figure out the mystery before it was revealed.

So when I heard there was going to be a film adaptation, I was nervous, because book to movie adaptations are either really good, or go horribly wrong. Sure there are some that fall in between but usually it’s either good or bad. So if I hear that I book I love is being turned into a movie, I never know whether to feel excited or scared.

Then I heard that they were changing the location in the novel from London to New York for the film. Which already got me annoyed, right off the bat they were altering the entire location to make it American. Then when the cast was revealed I wasn’t sold, I didn’t think they fit the characters. So, I became very nervous about the film. But I have a rule that I cannot pass a complete judgement on something until I give it a chance. So, I went out with a group of friends and we saw the film.

Overall, it’s a good film especially if you are unfamiliar with the book. The film does well at building the suspense. I was also more pleased with the casting than I originally anticipated. My biggest ‘issue’ with the casting was having Emily Blunt as the lead role of Rachel; mostly because Emily seemed too pretty to play the haggard alcoholic Rachel. But the makeup department did an amazing job in making her seem more bedraggled. The casting of Ana and Megan was spot on in my opinion.

Also the pacing of the film felt too fast, events were happening much faster than they should have. And yes, I know that this is mostly due to the time restraints of the film, and they wanted to further the plot. However, the pauses between reveals help to suspend the suspense and build up the suspect pool. I just feel like because they sort of fast tracked everything, it was too obvious and easy to figure out the killer.

But in the end, I enjoyed the film version of Girl on the Train. Plus I know that I have a tendency to pull apart films too much and expect too much from adaptations. I just can’t help myself. I definitely think if you haven’t already, buy the book because the book is always better plus there is more to the story, and then go see the film. Don’t do it the other way around.

I hope this deviation from book reviews is okay, but I definitely want to do more posts about film adaptations especially with a fair few on the horizon. So let me know what you think of this one.