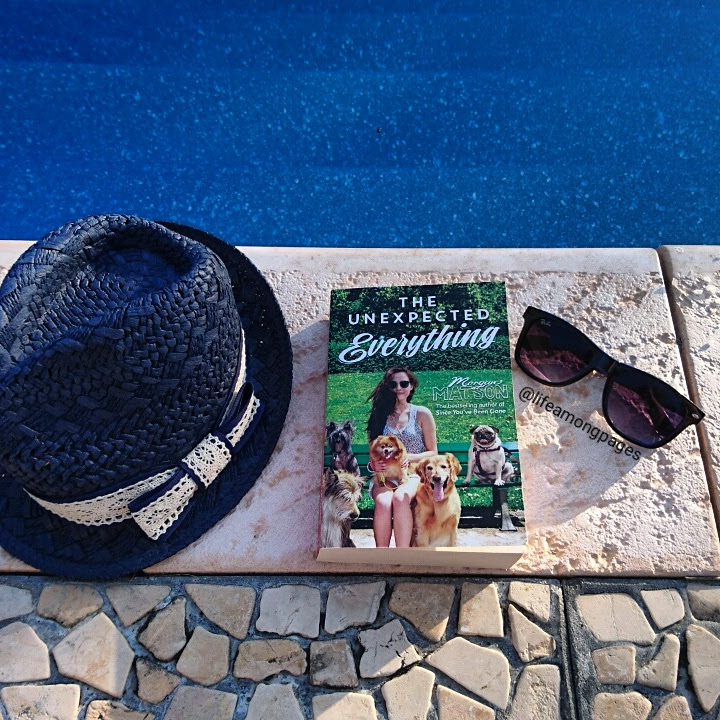 “I could do this. If whole galaxies could change, so could I.”

“Andie has a plan. And she always sticks to her plan.
So it’s no surprise that Andie’s got her summer all planned out too.
Until a political scandal costs Andie her summer pre-med internship, and lands both she and Dad back in the same house together for the first time in years. Suddenly she’s doing things that aren’t Andie at all—working as a dog walker, doing an epic scavenger hunt with her dad, and maybe, just maybe, letting the super cute Clark get closer than she expected. Palmer, Bri, and Toby tell her to embrace all the chaos, but can she really let go of her control?” (Summary from Goodreads)

The Unexpected Everything is a light, enjoyable, and easy read. The perfect book to read whilst laying in the sunshine, while at the beach or beside a pool. It is just a lot of fun.

“The idea that you could rethink the thing you’d always thought you wanted and change your plan – it was almost a revolutionary concept. That you could choose what would make you happy, not successful.”

I was surprised by how quickly I devoured The Unexpected Everything. However, it’s also quite forgettable. What I mean by this is that when you’re actively reading this book, you find yourself completely immersed, but after you finish the characters and dilemmas start to fade away. This is mostly because it is like a lot of YA contemporaries on the market; light, fluffy and easy to see the ‘twists’ coming.

It was slow going at the beginning, it took a while to find its feet but once it did it got really good. At first Andie is the kind of character that made my eyes roll. She was just so entitled, and used to her lavish life. A control freak who spirals out of control when something doesn’t go according to her “plan.” She just felt like the epitome of first world problems. Her internal voice at times felt so whiney and much younger than her supposed 17 years. That being said she does develop over time and became a much better character.

The “love triangle” between two of Andie’s best friends was just so incredibly obvious. It was painful watching the characters blatantly not see what was happening right in front of them. It was actually frustrating and one of those “twists” that was supposed to shock us? I don’t know maybe its just me, but I saw it within the first couple of times we saw the guy at the heart of the triangle.

Clark was my favourite part/ character of the book. He just made me swoon, and my heart pitter-patter, mostly because he reminds me a lot of my own boyfriend, especially Andie and Clark’s banter. I just loved him and was so impressed that he was a published author at such a young age (even though that is something that is occurring more often today in the world of self publishing). I also adored that excerpts from his novels were included throughout The Unexpected Everything, they broke up the chapters nicely and revealed subtle bits of foreshadowing and insight. Its something that was also used in Fangirl but I think was used a little more effectively here, because it didn’t happen every chapter.

“You have to try. You have to take your chances. Go and attempt and see what happens. And even if you fail – especially if you fail – come back with your experience and your hard-won knowledge and a story you can tell. And then later you can say, without regret or hesitation… ‘Once, I dared to dare greatly”

I enjoyed seeing the relationship between Andie and her father, it was quite refreshing. Whilst it started like most do with there being a big rift between them, I loved reading as they mended their broken relationship. Her dad was by far the best side character ever, especially during the scavenger hunt. That was probably my favourite part of the whole book.

The writing was nice, light, it didn’t take up much energy to read, and I consumed chapters easily. It wasn’t spectacular, and all the minor details fade after finishing. However, that’s not entirely a bad thing, sometimes you need a book like that to act as a sort of ‘palette cleanser’ between the bigger, more in-depth series and this is what The Unexpected Everything does best. I would recommend this to everyone who loves YA Contemporaries, Romance, and swoon worthy guys because Clark is wonderful.

3 comments on “The Unexpected Everything by Morgan Matson | Review”