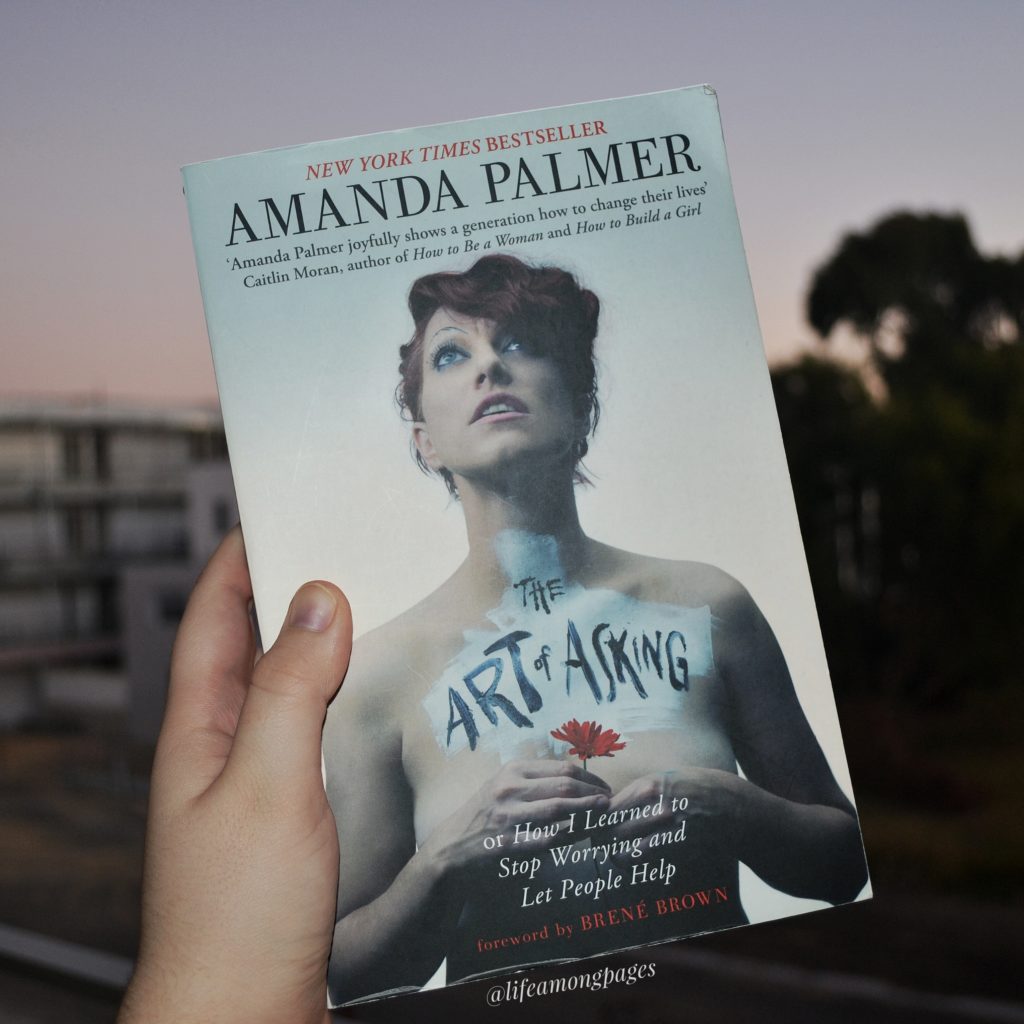 “From what I’ve seen, it isn’t so much the act of asking that paralyses us–it’s what lies beneath: the fear of being vulnerable, the fear of rejection, the fear of looking needy or weak. The fear of being seen as a burdensome member of the community instead of a productive one. It points, fundamentally, to our separation from one another.”

This book was incredibly different to what I expected, but in a way it was also much more. At first, I had thought it would be a mild advice book, backed up with analogies from her life. However, it was more of a memoir than self help, but that doesn’t mean you cant learn from Amanda’s experiences.

The Art of Asking; or, How I Learned to Stop Worrying and Let People Help is a very in-depth look into the life of Amanda Palmer up close, personal, and without a filter. It proves that even though she lives an insane life, and is very well known musician. She is just a person, like you and me. She is flawed, makes mistakes, and has fears and anxiety about life, just like everybody else. Which is why it was exactly what I needed to read, much of what she said resonated strongly with me.

“Rock star, crowd funding pioneer, and TED speaker Amanda Palmer knows all about asking. Performing as a living statue in a wedding dress, she wordlessly asked thousands of passers-by for their dollars. When she became a singer, songwriter, and musician, she was not afraid to ask her audience to support her as she surfed the crowd (and slept on their couches while touring). And when she left her record label to strike out on her own, she asked her fans to support her in making an album, leading to the world’s most successful music Kickstarter.

Even while Amanda is both celebrated and attacked for her fearlessness in asking for help, she finds that there are important things she cannot ask for-as a musician, as a friend, and as a wife. She learns that she isn’t alone in this, that so many people are afraid to ask for help, and it paralyses their lives and relationships. In this groundbreaking book, she explores these barriers in her own life and in the lives of those around her, and discovers the emotional, philosophical, and practical aspects of THE ART OF ASKING.” (Summary from Goodreads)

“As I moved through my life as a statue and later as a musician, I started to understand. There’s a difference between wanting to be looked at and wanting to be seen.”

This layout to the book was different to what I expected, at first I didn’t know if there was any order to the book, as there weren’t any clear chapters. So, I thought that it might just be one long continuous story, which jumps back and forth throughout her life. However, I later realised that it is indeed group together, at the beginning of each “section” is a photo of Amanda, and song lyrics, and either the song or the lyrics determines the stories that are told, which are often linked. I’m not sure it was the best way to layout the book, but it certainly works for Amanda who does not stick to the normal standard way of doing … anything.

Her description of ‘the fraud police’ “who will lock you up and humiliate you for faking it” really struck home with me. My life constantly feels like I have no idea what I’m doing, and when everyone realizes this, I will lose everything.

“The Fraud Police are the imaginary, terrifying force of ‘real’ grown-ups who you believe – at some subconscious level – are going to come knocking on your door in the middle of the night, saying: We’ve been watching you, and we have evidence that you have NO IDEA WHAT YOU’RE DOING. You stand accused of the crime of completely winging it, you are guilty of making shit up as you go along, you do not actually deserve your job, we are taking everything away and we are TELLING EVERYBODY.”

Her section on how she met Neil, and how their relationship developed slow at first and then flourished. His proposal! Everything about their relationship was all so incredibly sweet. It evolved rather differently than one might think, but their story fits them perfectly. Plus their son is absolutely adorable.

Whilst completely disjointed time wise. It sort of made perfect sense. Because you see why something caused her to do something else directly and not have to read about the 5 years in between that had nothing to do with the point she was making. It’s direct. And also, whilst I don’t know Amanda very well, this just seems perfect for the kind of person she is. She seems like the kind of person who breaks a thought mid sentence because she was reminded of something else. This is nice to read, because I am the same.

Overall, I really enjoyed the book; Amanda has lived an amazing life. Moreover, hearing about how deeply she connects with her fans and what she has done to protect that connection is rather endearing. This isn’t the self-help book people might be looking for, but it has some rather good advice that people might need. Much of what she said aligned with my feelings when I was reading it. Some of her situations were parallel to things I was experiencing myself; especially feeling guilty about accepting money from loved ones when in a lull.

Sometimes you just have to accept the donuts.