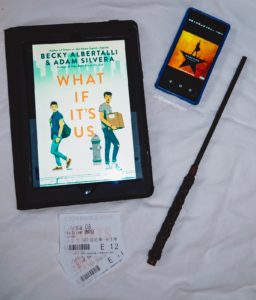 “I barely know him. I guess that is every relationship. You start with nothing and maybe end with everything.”

I feel quite conflicted by this book. On one hand it was a super cute, enjoyable, lighthearted read. When I first saw the title I immediately thought of the song from Dear Evan Hansen and once I started reading the book I knew that was Becky and Adam’s intention, especially as the lyrics are split to form the different parts of the book: “What If”, “It’s Us”, “And Only Us”.

“Arthur is only in New York for the summer, but if Broadway has taught him anything, it’s that the universe can deliver a showstopping romance when you least expect it.

Ben thinks the universe needs to mind its business. If the universe had his back, he wouldn’t be on his way to the post office carrying a box of his ex-boyfriend’s things.

But when Arthur and Ben meet-cute at the post office, what exactly does the universe have in store for them?

What if Arthur tries too hard to make it work . . . and Ben doesn’t try hard enough? What if life really isn’t like a Broadway play? But what if it is?” – Summary from Goodreads

“I’m just going to live in the moment. That’s the only way to see where we end up.”

However, on the other hand, it felt like the books was trying too hard at times, bogging every chapter down with musical and pop culture references to make the characters #relatable. I just felt like it was too much at times. Yes, Hamilton is a great musical, and yes its a worldwide sensation … BUT Arthur was too intense about it. All. The. Time. Which is funny considering the book is titled of Dear Evan Hansen lyrics.
Overall, I enjoyed What If It’s Us, I smiled, laughed and cringed. Arthur’s character reminded my of Tyler Oakley with his enthusiastic and over exuberant nature.
Arthur coworkers at his Mum’s firm were fantastic. I loved their sarcasm and dry wit, it was a good juxtaposition from Arthur’s bubblyness.
Ben’s breakup hit home and was very realistically portrayed. The hurt, the wanting to be rid of reminders, how hard seeing them again is. It was all very well handled.
Ben’s best friend Dylan, what a character! So eccentric and out there, super addicted to coffee and so quick to fall in love. His relationship with Sam was fun to watch unfold. I also cringed, a lot, the boy needs to develop a filter.
The disastrous dates … wow.. I was getting to the point where I wondered how many disasters it would take before they realised that obviously things were not working. They were very different and had completely opposite interest and ideas on what a good date involved. The Ansel Elgort scene was hilarious, I just about died from the secondhand shame.
I’m not sure how I feel about the ending, well specifically the epilogue the previous chapter ending was perfection. I mean it was nice to know they were okay and what colleges they ended up at, but it also didn’t feel entirely necessary. What If It’s Us was very different to what I was anticipating, I think it was trying too hard to be the next Simon vs the Homo Sapiens Agenda but ultimately it fell short.

“But maybe this isn’t how life works. Maybe it’s all about people coming into your life for a little while and you take what they give you and use it on your next friendship or relationship. And if you’re lucky, maybe some people pop back in after you thought they were gone for good.”